In an age of nonstop innovation, companies and individuals with original ideas have a distinct advantage over those who don’t. Why? Because original ideas are at the heart of innovation, differentiation, and brand transformation. The Originality Scale is a simple way to categorize your ideas according to the knowledge and imagination that informs them.

Originality comes from the exposure of factual knowledge to the animating force of imagination. We might express it like this: If you apply a small amount of imagination to a small amount of knowledge, you can achieve a small amount of originality by simply adapting an idea from the domain you’re working in. For example, you might “steal” an idea from a competitor, making just enough modifications to create a minimum of difference. This is how most of us learn our professions. We stand on the shoulders of more experienced practitioners. As you gain more experience in your domain, you may be able to apply the same amount of imagination to a broader base of knowledge. This will allow you to bring an idea from a different domain into your own domain. An automotive designer, for example, could bring an idea from social networking to the design of a car. Or the CEO of an insurance company could adapt a management idea from the pharmaceutical industry. With more imagination, you might produce an idea that you’ve never seen before. This is usually the first stage of becoming an original thinker. Until you can surprise yourself, it’s unlikely that you’ll surprise the rest of the world. But, of course, if your knowledge of the world is too narrow, you may be the only one who is surprised. 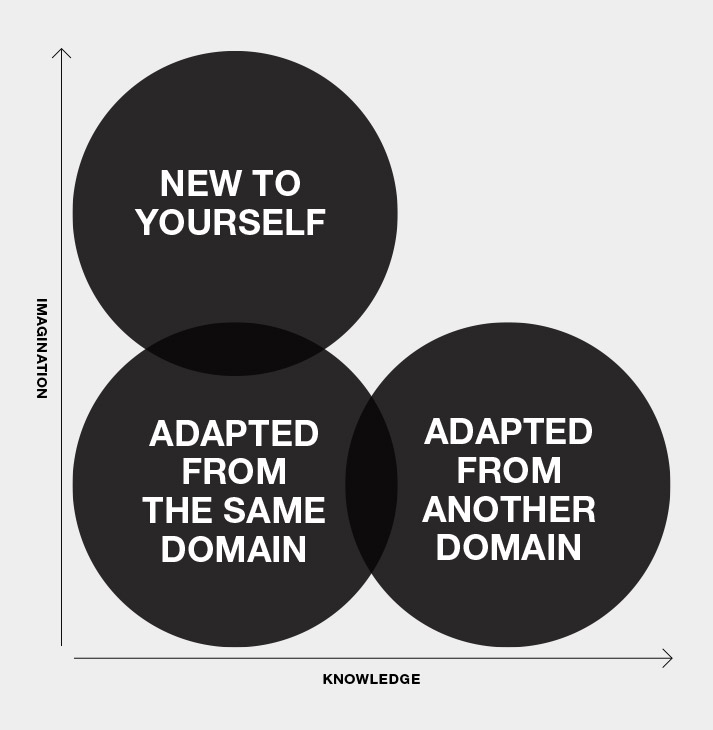 Finally, when you can apply a great deal of imagination to a great deal of knowledge, you have the ability to introduce ideas that are new to everyone. You then become a reliable generator of valuable ideas, able to innovate at will. But mastery begins by being honest about your abilities at each stage of your learning. Use this set of slides to start a discussion with your team. Read my book, Metaskills, to find out more about the principles and processes of innovation.