If you’re repositioning a brand, or if you’re curious about where to take your brand after you launch it, this tool will help you understand how and when to renew your zag as it moves through the three stages of the “competition cycle.”

Whenever our brand coaches give a workshop on brand positioning, this question always comes up: If focus is so important to success, how do so many unfocused companies grow so large? In other words, how can you explain the success of a company like General Electric, which markets everything from power plants to plastics, insurance to entertainment, and light bulbs to light rail systems? Or Mitsubishi, which puts its name on 23,720 offerings from automobiles to aerospace, textiles to tobacco, and banks to broccoli? The fact is, as powerful as the principle of focus is, companies with different degrees of focus can coexist in the marketplace. Perhaps the easiest way to understand how this can happen is through the children’s game of scissors, paper, rock. Remember how it goes? Scissors cuts paper, paper covers rock, rock breaks scissors. Each position has its strengths and weaknesses, creating a balanced cycle of competition.

Business history suggests that companies thrive best when they settle into “stable states,” conditions in which the business environment is fairly predictable and employees have confidence in what they’re doing. In self-organization theory – the part of chaos theory that studies how order seems to arise spontaneously in complex systems – these stable states are called “attractors.” As a company grows, it’s attracted to one of three main states, which we can call scissors, paper, and rock.

A “scissors” company is a startup or small business, often having only one brand. What distinguishes a scissors company is its extremely sharp focus. It competes by cutting out a small area of business (white space) from the market dominated by much larger “paper” companies, who are too slow to respond.

As a scissors company becomes successful and begins to grow, it morphs into a “rock” company, a medium-sized organization that typically has more brands and less focus. Its defining characteristic is no longer focus but momentum. Rock companies thrive by crushing “scissors” companies, who don’t have the resources to compete head to head with them.

As a rock company grows, its momentum begins to fade, and eventually it turns into a “paper” company. What distinguishes a paper company is its sheer size. With even more brands and even less focus, it survives by using its network and resources to smother “rock” companies.

And round and round they go. 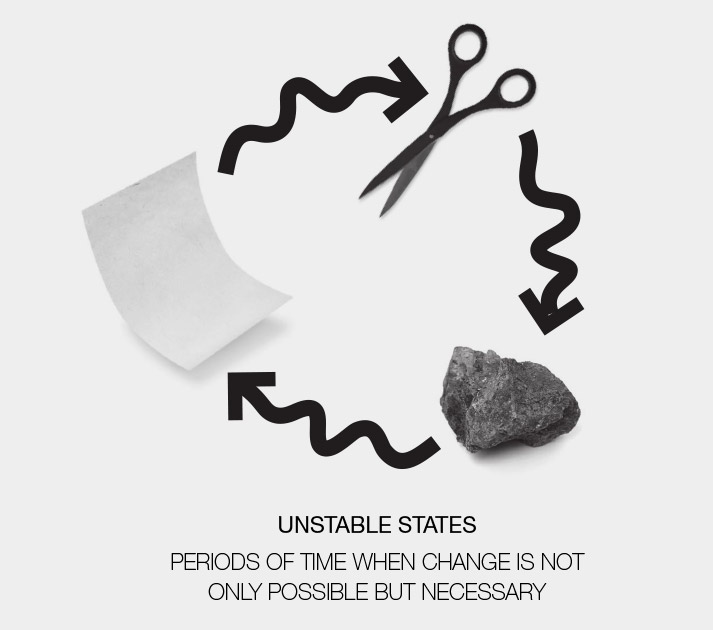 There are three observations you can make about the competition cycle: 1) companies tend to grow clockwise, from scissors to rock to paper; 2) they tend to compete counter-clockwise – paper covers rock, rock breaks scissors, scissors cuts paper; and 3) the spaces between the stable states are “unstable states” – periods of time when change is not only possible but necessary. It’s during these unstable periods that companies often need to reposition their brands.

What can you do with scissors-paper-rock? Tons. Seeing where you fit in the competition cycle lets you 1) exploit your company’s strengths and minimize its weaknesses; 2) exploit your competitors’ weaknesses and better prepare for their attacks; 3) use the unstable states to reinvent your zag; and 4) renew your zag during the stable states to block a competitive move or simply remain vital.

Renewing, repositioning or reinventing your brand? Start with scissors-paper-rock.